ZICA Celebrates AESTHETICS, student conclave of Animation, VFX and Film Making professionals, students and corporates in the related fields. It gives a common platform to the students where the students participate from all corners of the country, exhibit their creative talent and win awards.

Mr. Mahan Pilankar conducted knowledgeable session on how to create Graphic Design creatives for various Social Media Platforms at ZICA Andheri. He showcased the production pipeline for the same from initial concept to final execution along with brand promotion.

Special class on ZBrush was conducted by Mr. Aditya at ZICA Ranchi.

Hats off to ZICA Baroda students for being supremely creative through '3D Street Art' at Fun Street, Baroda. This illusion art was appreciated by visitors and also got covered in local media - Divya Bhaskar Newspaper, Tnn Samachar Gujarati (TV news).

ZICA students from all centres came up with amazing artistic creatives of Independence Day.

On 26th July, ZICA celebrated Kargil Vijay Diwas to remember and salute our martys who never backed down.

Life in the Moment - Malleshwaram

"LIFE IN THE MOMENT" seminar conducted by Ms. Pallavi Bharadwaj (An IISC scientist and a soft skill trainer) at ZICA Malleshwaram. It was regarding being aware of your inner potential and become confident. Some stress relief exercises and meditation were conducted for the students by Pallavi.

ZICA Baroda students have gone for Live Sketching at Baroda Central Depo to make live Sketching and to get more clear ideas for human gesture.

ZICA Surat executed Face and Body Painting through UV colors. Such neon painting takes 1 to 2 hours per person. This activity got covered on the front page of 'Divya Bhaskar' newspaper city edition.

ZICA Surat arranged Silhouette Painting activity. In the art form, background color can be any, but the main subject has to be highlighted by black color.

Thermocol Doremon was created by ZICA Baroda student Kaushik Suryavanshi in one day.

ZICA Malleshwaram conducted ZPL cricket tournament. 4 teams participate in the game on 6th Dec 2017.
Winning Team Name: DC - Dark Cricketers
Man of The Match: Girish kumar
Medals were given to all the members of the winning team.

Best out of Waste

'Best out of waste' event of ZICA Indore was featured in Dainik Bhaskar.

ZICA Surat alumni Aman Sukhadia (http://www.imdb.com/name/nm8508763/) has made a mark in the Film fraternity. He has worked on the short film 'The Stranger on the Bus' as an actor which has been nominated in Oscar Short Film category in 2015.

ZICA Baroda Alumni Dipev Patel is owner of 'Akshar Chalchitram Studio'. They had made 5 videos on the occassion of 'Akshardham' completing successful 25 years. The vidoes were projected on the screen size of 12 ft x 90 ft.

Our honorable Prime Minister Mr. Narendra Modi was present at the event.

ZICA Surat alumni Aman Sukhadia has made a mark in the Film fraternity. He has worked on the short film 'The Stranger on the Bus' as an actor which has been nominated in Oscar Short Film category in 2015.

Aesthetics 2014, ZICA’s first ever National Student’s Meet was conducted on 27th & 28th February 2015. The event brought together all its students from across the nation under one roof and on a common platform for the very first time in ZICA’s history. It was a hugely successful event with nearly 100 students who participated from all across India. There were 24 entries from 13 ZICA franchise centers.

Aesthetics 2014-2015 gave students an opportunity to showcase their creativity via their independent films and awarding them on the same in various categories by the jury members. It was a hugely successful event with nearly 100 students who participated from all across India.

Set amidst the calm and peaceful greeneries of Karjat, the venue for this prestigious event was Mohili Meadows Resort . All the students reached the event by bus from Mumbai to Karjat. The 1st day was scheduled for various adventure activities. In the evening, students enjoyed activities such as a Rain Dance and then a Bonfire Huddle. The second day started with the showcasing of student films. The venue of the gala Award’s Night which was supposed to be held in an open space in a huge set that was erected. This underwent a change as the rain came down heavily, so it had to be arranged in the hall. Mr. Subhajit Sarkar shared his experience and also guided the students on how to build a good portfolio / showreel. Students from Andheri and Banshankari performed cultural programs. The award night made the winners exhilarated.

On the day one the students had a whale of time as they explored the adventures at the resort and also engaged themselves with their fellow ZICAites from the other centres. The various adventure activities available for them were Zip line, Mud Fight, Sumo Wrestling, Rocket Ejection, Rifle shooting. In the evening, students enjoyed activities such as a Rain Dance and then a Bonfire Huddle which was filled with music and team engaging games like treasure hunt.

The second day started with the showcasing of student films. It was an exclusive opportunity for students to share their concept and vision on the basis of which they had prepared their short films. They also got to learn few things or more from the mentors of the various centres present during the screening.

The showstopper of the event was the Gala Awards night as the awards and cultural performances had the students exhilarated. The guest of honor was Mr. Subhajit Sarkar who has been one of the key persons in the Hollywood VFX & Animation industry since the last 12 years, having worked with major studios like Rhythm & Hues & Prime Focus. He has worked on some of the outstanding academy award winning films like Golden Compas, Alwin and the chipmunks, Life of Pi and many more. Students got an exclusive opportunity to interact with Mr. Subhajit as he shared his experience and guided them how to build a good portfolio /showreel.

Apart from the buzz & excitement of winning the coveted Awards, the Awards night featured cultural performances by Students from Andheri and Banshankari. A tribute was paid to the Late Legendary Cartoonist, R.K Laxman. Mr. Chetal Gazdar, Head of VFX Dept. left the audience in splits by his hilarious stand-up comedy routine.

In all, Aesthetics 2014-15 was about creativity, power-packed talent, magnificent performances, entertaining acts- a complete package. At the end of the two days of fun, learning and creativity, students let their hair down and shook a leg to the tunes of the DJ; a fitting end to the event.

Below mentioned are the links to view these Award-wining short films :-

Following links are the AnimationXpress news articles of Aesthetics

We had concluded this years edition of AESTHETICS 2019 - Youth Conclave. We have received an overwhelming response from the students and faculties who have attended the event. Please find attached the glimpses of the event.

On 1st day the seminar by the eminent personalities from industry such as Adobe (Guru Vaidya, Sr Solutions Consultant, Adobe Systems), Jainareesh, Education Account Manager, Unity Technologies, MSI (Abhay Prabhu, Marketing Dept,) Shrinivas Rao, Online editor and Colorist, MSI Global), Zee5 (Aparna Achrekar, Programming Head, Zee5), were well appreciated by our students. In the evening there were a showcase of nominated films from 2D Animation, 3D Animation, Stopmotion, VFX & Live Action Films. This event was eye-opening for our students where they cheered for good films and learned where they have made mistakes so that they can correct it in the next session of Aesthetics. Students took the learning very positively as there was no criticism from the viewers.

Now, the stage was set for students to perform in the cultural program which consists of individual & group dance performances, singing and poetry uplift their mood. The award night was graced by Mr Debshankar Mukhopadhyay CEO, Zee Learn Ltd. and Mr Vikas Kar, HR Head, Zee Learn Ltd. The awards were judged by eminent industry personalities.

The DJ night after the award ceremony for the students and staff was the cherry on the cake.

On the Last day, students visited sets of “Sa Re Ga Ma Pa” finals (rehearsals) the finals event will be telecasted on ZEE TV.

Aesthetics is Zee Group & Zee Learn’s Animation, VFX and Film Making conclave of professionals, students and corporates in the related fields. It gives a common platform to the students where the students participate from all corners of the country, exhibit their creative talent and win awards.

We have conducted ‘AESTHETICS FILM AWARD’ – A short film competition for all its students. It gives phenomenal weightage to the student’s academic credentials, thereby increasing student’s chances of getting a great head start in his/her career.

Juries to evaluate the movies

We had renowned industry professionals as speakers, following are the details

XP Pen conducted on-sight competition among students and the winners were awarded with Pen Tablet. The DJ night after the award ceremony for the students and staff was the cherry on the cake. On the Last day, students visited to IMAGICA amusement park for fun filled rides. Congratulations to all the winners and best wishes to all the participants!!! 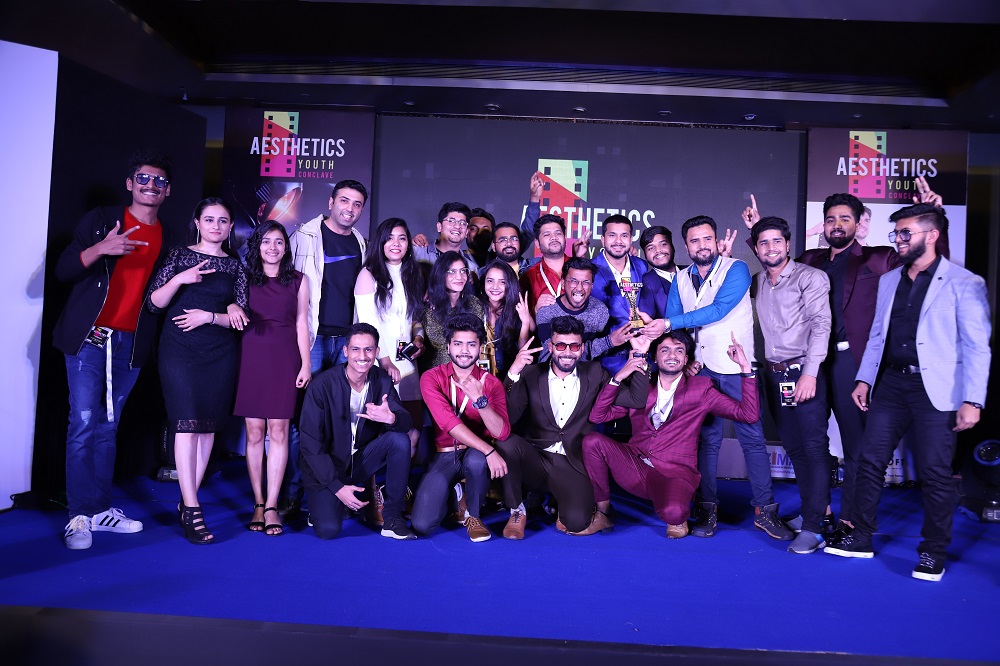